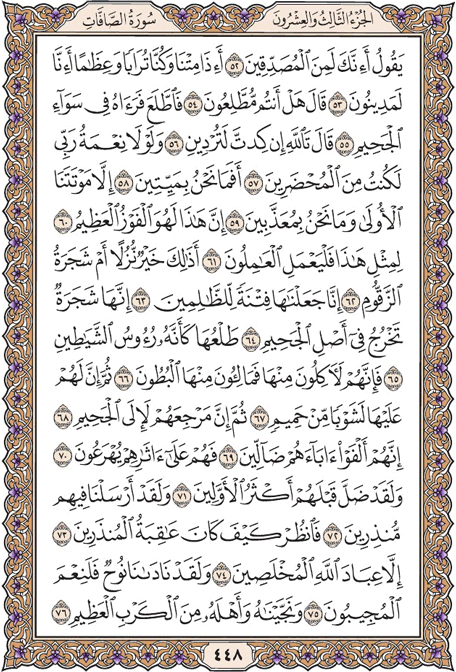 Who would say, 'Are you indeed of those who believe

That when we have died and become dust and bones, we will indeed be recompensed?'|

And he will look and see him in the midst of the Hellfire.

He will say, |By Allah , you almost ruined me.

If not for the favor of my Lord, I would have been of those brought in [to Hell].

Then, are we not to die

Except for our first death, and we will not be punished?|

Indeed, this is the great attainment.

For the like of this let the workers [on earth] work.

Is Paradise a better accommodation or the tree of zaqqum?

Indeed, We have made it a torment for the wrongdoers.

Indeed, it is a tree issuing from the bottom of the Hellfire,

Its emerging fruit as if it was heads of the devils.

And indeed, they will eat from it and fill with it their bellies.

Then indeed, they will have after it a mixture of scalding water.

Then indeed, their return will be to the Hellfire.

Indeed they found their fathers astray.

And there had already strayed before them most of the former peoples,

And We had already sent among them warners.

Then look how was the end of those who were warned -

But not the chosen servants of Allah .

And Noah had certainly called Us, and [We are] the best of responders.

And We saved him and his family from the great affliction.