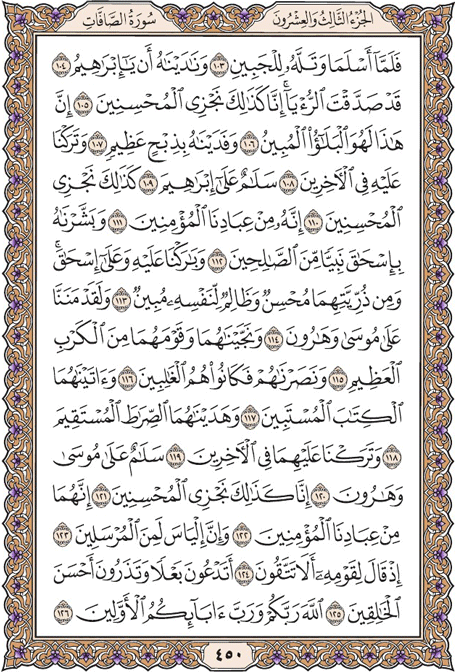 And when they had both submitted and he put him down upon his forehead,

We called to him, |O Abraham,

You have fulfilled the vision.| Indeed, We thus reward the doers of good.

Indeed, this was the clear trial.

And We ransomed him with a great sacrifice,

And We left for him [favorable mention] among later generations:

And We gave him good tidings of Isaac, a prophet from among the righteous.

And We blessed him and Isaac. But among their descendants is the doer of good and the clearly unjust to himself.

And We did certainly confer favor upon Moses and Aaron.

And We saved them and their people from the great affliction,

And We supported them so it was they who overcame.

And We gave them the explicit Scripture,

And We guided them on the straight path.

And We left for them [favorable mention] among later generations:

|Peace upon Moses and Aaron.

Indeed, they were of Our believing servants.

And indeed, Elias was from among the messengers,

When he said to his people, |Will you not fear Allah ?

Do you call upon Ba'l and leave the best of creators -

Allah , your Lord and the Lord of your first forefathers?|