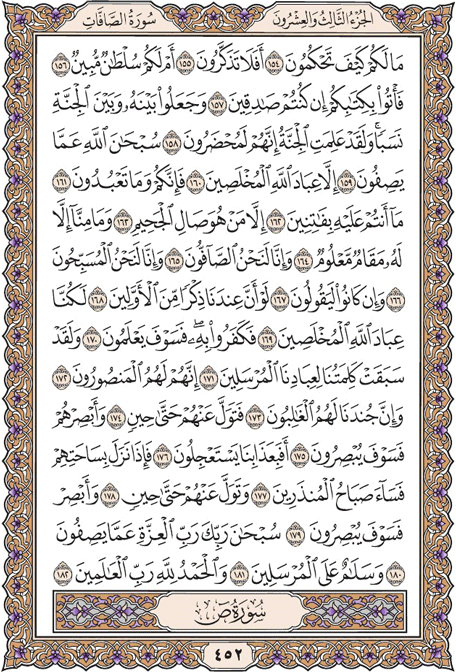 What is [wrong] with you? How do you make judgement?

Then will you not be reminded?

Or do you have a clear authority?

Then produce your scripture, if you should be truthful.

And they have claimed between Him and the jinn a lineage, but the jinn have already known that they [who made such claims] will be brought to [punishment].

Exalted is Allah above what they describe,

Except the chosen servants of Allah [who do not share in that sin].

So indeed, you [disbelievers] and whatever you worship,

You cannot tempt [anyone] away from Him

Except he who is to [enter and] burn in the Hellfire.

[The angels say], |There is not among us any except that he has a known position.

And indeed, we are those who line up [for prayer].

And indeed, we are those who exalt Allah .

And indeed, the disbelievers used to say,

|If we had a message from [those of] the former peoples,

We would have been the chosen servants of Allah .

But they disbelieved in it, so they are going to know.

And Our word has already preceded for Our servants, the messengers,

[That] indeed, they would be those given victory

And [that] indeed, Our soldiers will be those who overcome.

So, [O Muúammad], leave them for a time.

And see [what will befall] them, for they are going to see.

Then for Our punishment are they impatient?

But when it descends in their territory, then evil is the morning of those who were warned.

And leave them for a time.

And see, for they are going to see.

Exalted is your Lord, the Lord of might, above what they describe.

And peace upon the messengers.

And praise to Allah , Lord of the worlds.