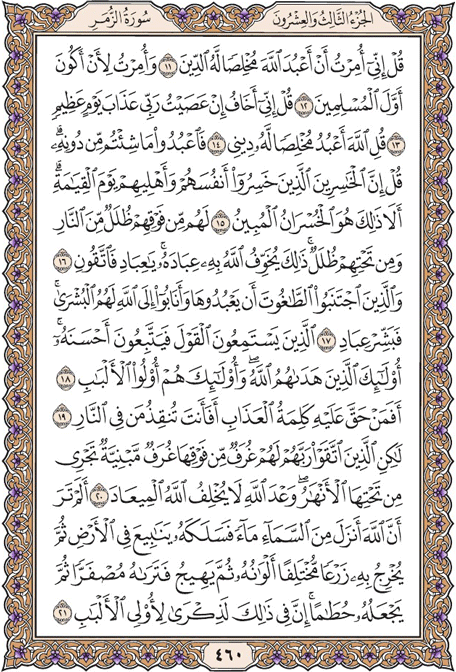 Say, [O Muúammad], |Indeed, I have been commanded to worship Allah , [being] sincere to Him in religion.

And I have been commanded to be the first [among you] of the Muslims.

Say, |Indeed I fear, if I should disobey my Lord, the punishment of a tremendous Day.

Say, | Allah [alone] do I worship, sincere to Him in my religion,

So worship what you will besides Him.| Say, |Indeed, the losers are the ones who will lose themselves and their families on the Day of Resurrection. Unquestionably, that is the manifest loss.

They will have canopies of fire above them and below them, canopies. By that Allah threatens His servants. O My servants, then fear Me.

But those who have avoided Taghut, lest they worship it, and turned back to Allah - for them are good tidings. So give good tidings to My servants

Who listen to speech and follow the best of it. Those are the ones Allah has guided, and those are people of understanding.

Then, is one who has deserved the decree of punishment [to be guided]? Then, can you save one who is in the Fire?

But those who have feared their Lord - for them are chambers, above them chambers built high, beneath which rivers flow. [This is] the promise of Allah . Allah does not fail in [His] promise.

Do you not see that Allah sends down rain from the sky and makes it flow as springs [and rivers] in the earth; then He produces thereby crops of varying colors; then they dry and you see them turned yellow; then He makes them [scattered] debris. Indeed in that is a reminder for those of understanding.