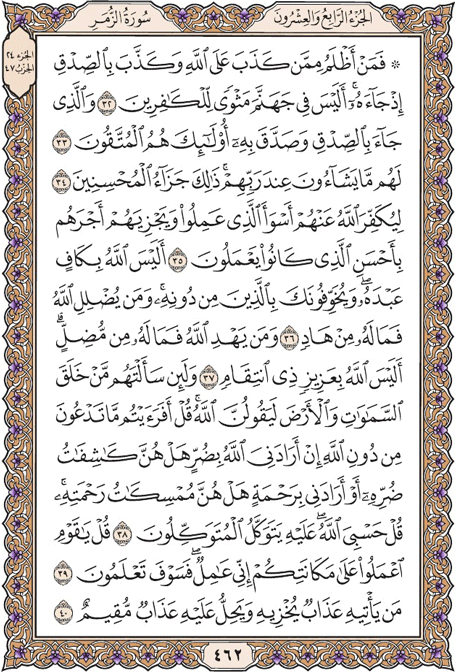 So who is more unjust than one who lies about Allah and denies the truth when it has come to him? Is there not in Hell a residence for the disbelievers?

And the one who has brought the truth and [they who] believed in it - those are the righteous.

They will have whatever they desire with their Lord. That is the reward of the doers of good -

Is not Allah sufficient for His Servant [Prophet Muúammad]? And [yet], they threaten you with those [they worship] other than Him. And whoever Allah leaves astray - for him there is no guide.

And whoever Allah guides - for him there is no misleader. Is not Allah Exalted in Might and Owner of Retribution?

And if you asked them, |Who created the heavens and the earth?| they would surely say, | Allah .| Say, |Then have you considered what you invoke besides Allah ? If Allah intended me harm, are they removers of His harm; or if He intended me mercy, are they withholders of His mercy?| Say, |Sufficient for me is Allah ; upon Him [alone] rely the [wise] reliers.

Say, |O my people, work according to your position, [for] indeed, I am working; and you are going to know

To whom will come a torment disgracing him and on whom will descend an enduring punishment.