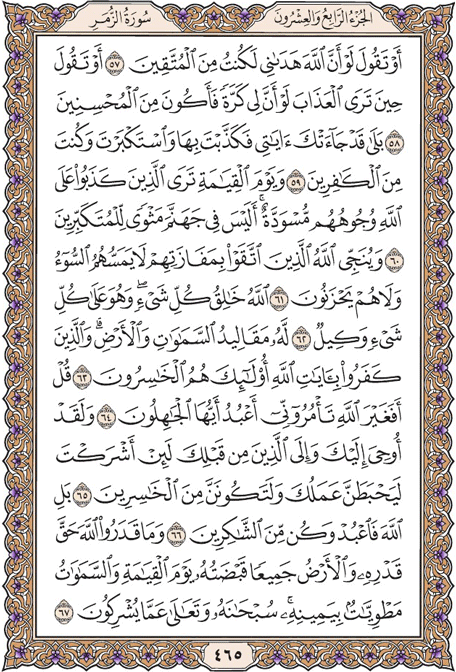 Or [lest] it say, |If only Allah had guided me, I would have been among the righteous.

Or [lest] it say when it sees the punishment, |If only I had another turn so I could be among the doers of good.

But yes, there had come to you My verses, but you denied them and were arrogant, and you were among the disbelievers.

And on the Day of Resurrection you will see those who lied about Allah [with] their faces blackened. Is there not in Hell a residence for the arrogant?

And Allah will save those who feared Him by their attainment; no evil will touch them, nor will they grieve.

To Him belong the keys of the heavens and the earth. And they who disbelieve in the verses of Allah - it is those who are the losers.

Say, [O Muúammad], |Is it other than Allah that you order me to worship, O ignorant ones?|

And it was already revealed to you and to those before you that if you should associate [anything] with Allah , your work would surely become worthless, and you would surely be among the losers.

Rather, worship [only] Allah and be among the grateful.

They have not appraised Allah with true appraisal, while the earth entirely will be [within] His grip on the Day of Resurrection, and the heavens will be folded in His right hand. Exalted is He and high above what they associate with Him.