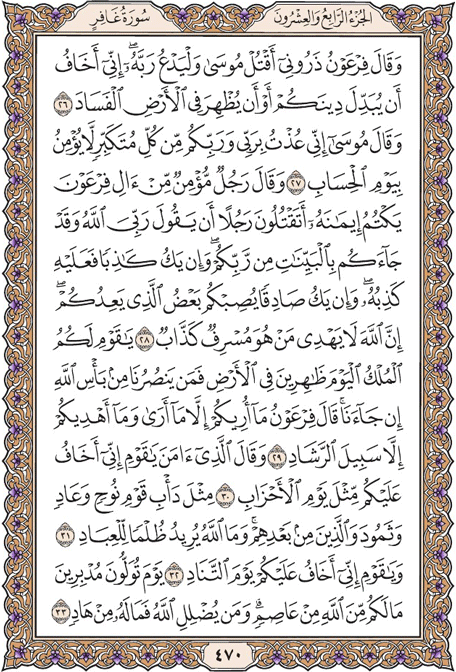 And Pharaoh said, |Let me kill Moses and let him call upon his Lord. Indeed, I fear that he will change your religion or that he will cause corruption in the land.

But Moses said, |Indeed, I have sought refuge in my Lord and your Lord from every arrogant one who does not believe in the Day of Account.

And a believing man from the family of Pharaoh who concealed his faith said, |Do you kill a man [merely] because he says, 'My Lord is Allah ' while he has brought you clear proofs from your Lord? And if he should be lying, then upon him is [the consequence of] his lie; but if he should be truthful, there will strike you some of what he promises you. Indeed, Allah does not guide one who is a transgressor and a liar.

O my people, sovereignty is yours today, [your being] dominant in the land. But who would protect us from the punishment of Allah if it came to us?| Pharaoh said, |I do not show you except what I see, and I do not guide you except to the way of right conduct.

And he who believed said, |O my people, indeed I fear for you [a fate] like the day of the companies -

Like the custom of the people of Noah and of 'Aad and Thamud and those after them. And Allah wants no injustice for [His] servants.

And O my people, indeed I fear for you the Day of Calling -