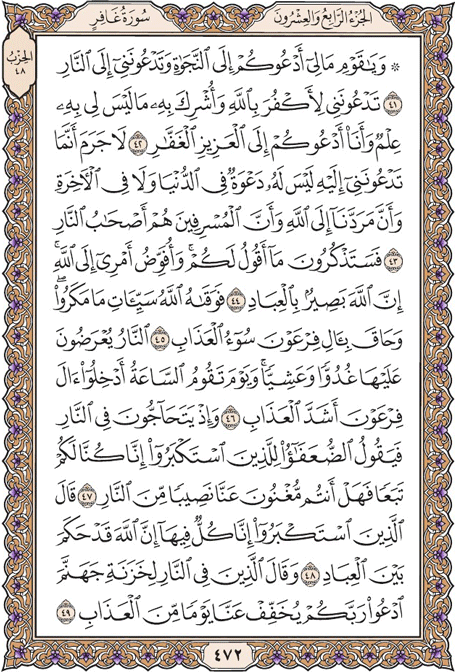 And O my people, how is it that I invite you to salvation while you invite me to the Fire?

You invite me to disbelieve in Allah and associate with Him that of which I have no knowledge, and I invite you to the Exalted in Might, the Perpetual Forgiver.

Assuredly, that to which you invite me has no [response to a] supplication in this world or in the Hereafter; and indeed, our return is to Allah , and indeed, the transgressors will be companions of the Fire.

And you will remember what I [now] say to you, and I entrust my affair to Allah . Indeed, Allah is Seeing of [His] servants.

So Allah protected him from the evils they plotted, and the people of Pharaoh were enveloped by the worst of punishment -

The Fire, they are exposed to it morning and evening. And the Day the Hour appears [it will be said], |Make the people of Pharaoh enter the severest punishment.

And [mention] when they will argue within the Fire, and the weak will say to those who had been arrogant, |Indeed, we were [only] your followers, so will you relieve us of a share of the Fire?|

Those who had been arrogant will say, |Indeed, all [of us] are in it. Indeed, Allah has judged between the servants.

And those in the Fire will say to the keepers of Hell, |Supplicate your Lord to lighten for us a day from the punishment.