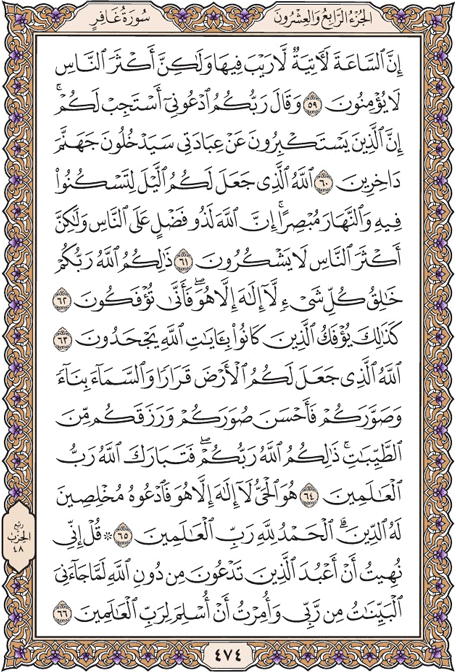 Indeed, the Hour is coming - no doubt about it - but most of the people do not believe.

And your Lord says, |Call upon Me; I will respond to you.| Indeed, those who disdain My worship will enter Hell [rendered] contemptible.

It is Allah who made for you the night that you may rest therein and the day giving sight. Indeed, Allah is full of bounty to the people, but most of the people are not grateful.

That is Allah , your Lord, Creator of all things; there is no deity except Him, so how are you deluded?

Thus were those [before you] deluded who were rejecting the signs of Allah .

It is Allah who made for you the earth a place of settlement and the sky a ceiling and formed you and perfected your forms and provided you with good things. That is Allah , your Lord; then blessed is Allah , Lord of the worlds.

He is the Ever-Living; there is no deity except Him, so call upon Him, [being] sincere to Him in religion. [All] praise is [due] to Allah , Lord of the worlds.

Say, [O Muúammad], |Indeed, I have been forbidden to worship those you call upon besides Allah once the clear proofs have come to me from my Lord, and I have been commanded to submit to the Lord of the worlds.