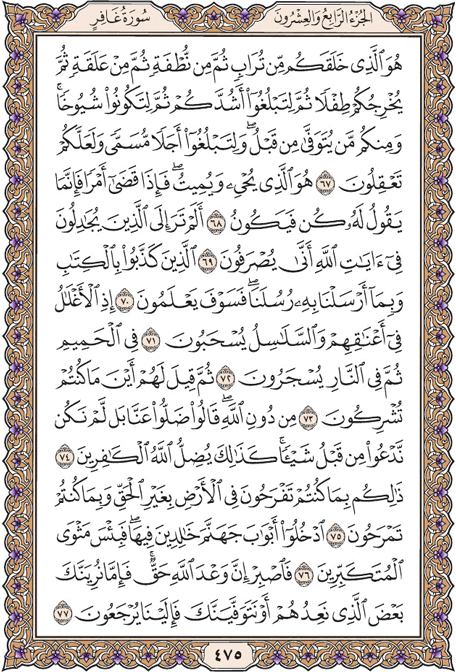 It is He who created you from dust, then from a sperm-drop, then from a clinging clot; then He brings you out as a child; then [He develops you] that you reach your [time of] maturity, then [further] that you become elders. And among you is he who is taken in death before [that], so that you reach a specified term; and perhaps you will use reason.

He it is who gives life and causes death; and when He decrees a matter, He but says to it, |Be,| and it is.

Do you not consider those who dispute concerning the signs of Allah - how are they averted?

Those who deny the Book and that with which We sent Our messengers - they are going to know,

When the shackles are around their necks and the chains; they will be dragged

In boiling water; then in the Fire they will be filled [with flame].

Then it will be said to them, |Where is that which you used to associate [with Him in worship]

Other than Allah ?| They will say, |They have departed from us; rather, we did not used to invoke previously anything.| Thus does Allah put astray the disbelievers.

[The angels will say], |That was because you used to exult upon the earth without right and you used to behave insolently.

Enter the gates of Hell to abide eternally therein, and wretched is the residence of the arrogant.

So be patient, [O Muúammad]; indeed, the promise of Allah is truth. And whether We show you some of what We have promised them or We take you in death, it is to Us they will be returned.