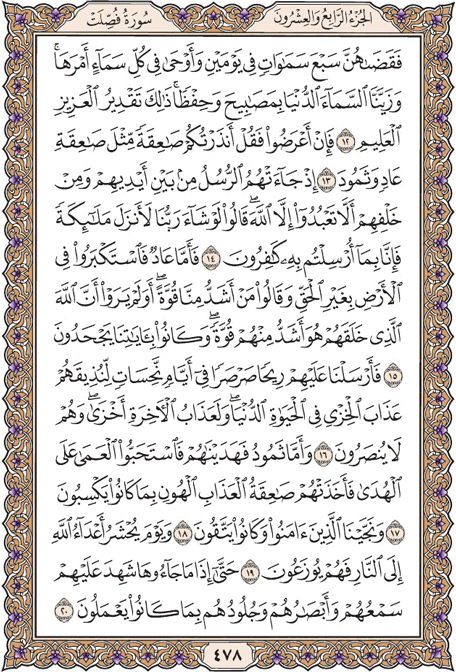 And He completed them as seven heavens within two days and inspired in each heaven its command. And We adorned the nearest heaven with lamps and as protection. That is the determination of the Exalted in Might, the Knowing.

But if they turn away, then say, |I have warned you of a thunderbolt like the thunderbolt [that struck] 'Aad and Thamud.

[That occurred] when the messengers had come to them before them and after them, [saying], |Worship not except Allah .| They said, |If our Lord had willed, He would have sent down the angels, so indeed we, in that with which you have been sent, are disbelievers.

So We sent upon them a screaming wind during days of misfortune to make them taste the punishment of disgrace in the worldly life; but the punishment of the Hereafter is more disgracing, and they will not be helped.

And as for Thamud, We guided them, but they preferred blindness over guidance, so the thunderbolt of humiliating punishment seized them for what they used to earn.

And We saved those who believed and used to fear Allah .

And [mention, O Muúammad], the Day when the enemies of Allah will be gathered to the Fire while they are [driven] assembled in rows,

Until, when they reach it, their hearing and their eyes and their skins will testify against them of what they used to do.