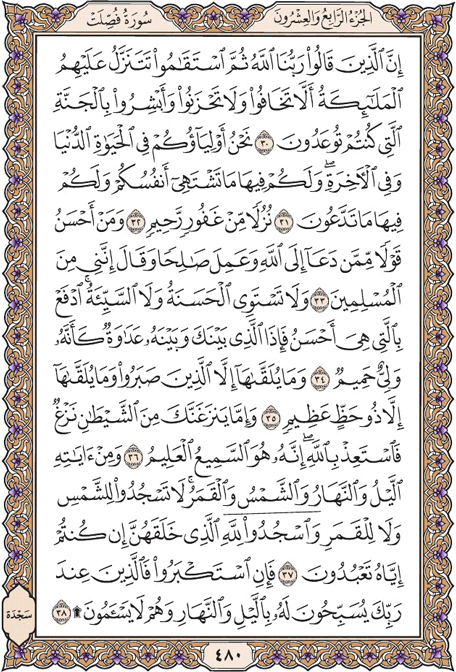 Indeed, those who have said, |Our Lord is Allah | and then remained on a right course - the angels will descend upon them, [saying], |Do not fear and do not grieve but receive good tidings of Paradise, which you were promised.

As accommodation from a [Lord who is] Forgiving and Merciful.

And who is better in speech than one who invites to Allah and does righteousness and says, |Indeed, I am of the Muslims.

And not equal are the good deed and the bad. Repel [evil] by that [deed] which is better; and thereupon the one whom between you and him is enmity [will become] as though he was a devoted friend.

And if there comes to you from Satan an evil suggestion, then seek refuge in Allah . Indeed, He is the Hearing, the Knowing.

And of His signs are the night and day and the sun and moon. Do not prostrate to the sun or to the moon, but prostate to Allah , who created them, if it should be Him that you worship.

But if they are arrogant - then those who are near your Lord exalt Him by night and by day, and they do not become weary.