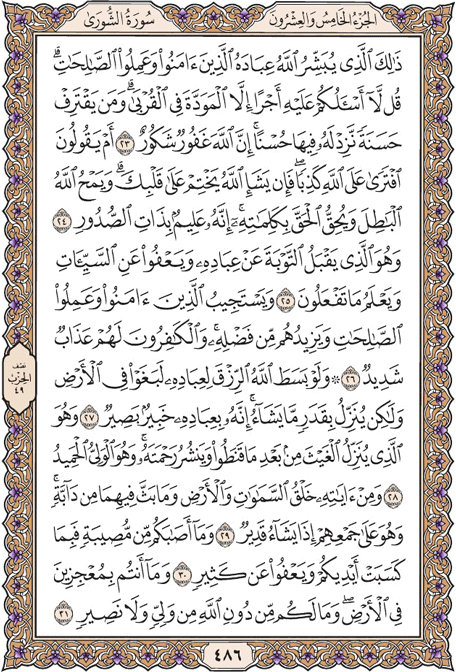 It is that of which Allah gives good tidings to His servants who believe and do righteous deeds. Say, [O Muúammad], |I do not ask you for this message any payment [but] only good will through kinship.| And whoever commits a good deed - We will increase for him good therein. Indeed, Allah is Forgiving and Appreciative.

Or do they say, |He has invented about Allah a lie|? But if Allah willed, He could seal over your heart. And Allah eliminates falsehood and establishes the truth by His words. Indeed, He is Knowing of that within the breasts.

And it is He who accepts repentance from his servants and pardons misdeeds, and He knows what you do.

And He answers [the supplication of] those who have believed and done righteous deeds and increases [for] them from His bounty. But the disbelievers will have a severe punishment.

And if Allah had extended [excessively] provision for His servants, they would have committed tyranny throughout the earth. But He sends [it] down in an amount which He wills. Indeed He is, of His servants, Acquainted and Seeing.

And it is He who sends down the rain after they had despaired and spreads His mercy. And He is the Protector, the Praiseworthy.

And of his signs is the creation of the heavens and earth and what He has dispersed throughout them of creatures. And He, for gathering them when He wills, is competent.

And whatever strikes you of disaster - it is for what your hands have earned; but He pardons much.

And you will not cause failure [to Allah ] upon the earth. And you have not besides Allah any protector or helper.