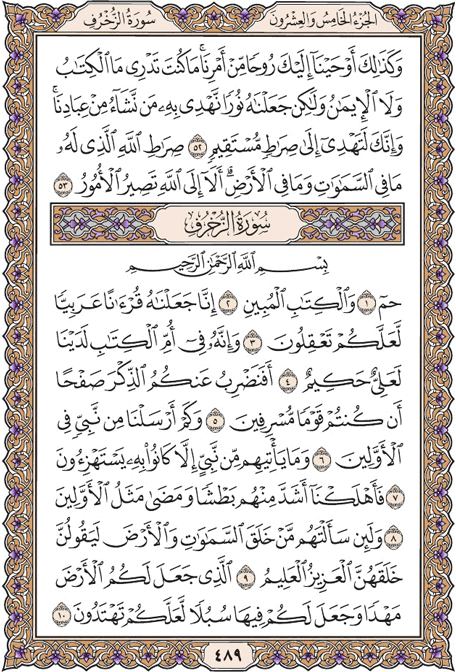 And thus We have revealed to you an inspiration of Our command. You did not know what is the Book or [what is] faith, but We have made it a light by which We guide whom We will of Our servants. And indeed, [O Muúammad], you guide to a straight path -

The path of Allah , to whom belongs whatever is in the heavens and whatever is on the earth. Unquestionably, to Allah do [all] matters evolve.

Indeed, We have made it an Arabic Qur'an that you might understand.

And indeed it is, in the Mother of the Book with Us, exalted and full of wisdom.

Then should We turn the message away, disregarding you, because you are a transgressing people?

And how many a prophet We sent among the former peoples,

But there would not come to them a prophet except that they used to ridicule him.

And We destroyed greater than them in [striking] power, and the example of the former peoples has preceded.

And if you should ask them, |Who has created the heavens and the earth?| they would surely say, |They were created by the Exalted in Might, the Knowing.