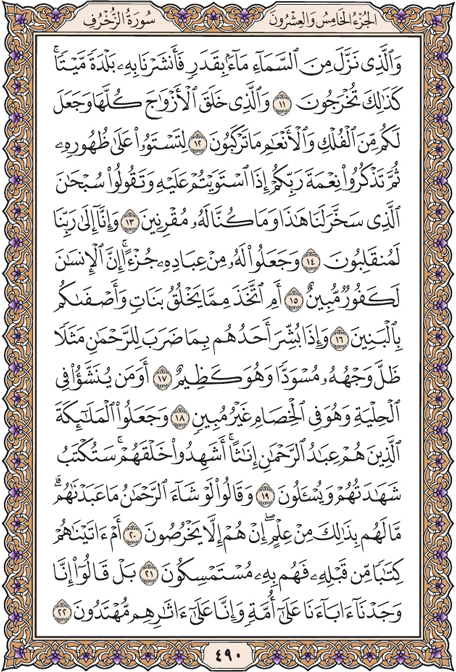 And who sends down rain from the sky in measured amounts, and We revive thereby a dead land - thus will you be brought forth -

And who created the species, all of them, and has made for you of ships and animals those which you mount.

That you may settle yourselves upon their backs and then remember the favor of your Lord when you have settled upon them and say. |Exalted is He who has subjected this to us, and we could not have [otherwise] subdued it.

And indeed we, to our Lord, will [surely] return.

But they have attributed to Him from His servants a portion. Indeed, man is clearly ungrateful.

Or has He taken, out of what He has created, daughters and chosen you for [having] sons?

And when one of them is given good tidings of that which he attributes to the Most Merciful in comparison, his face becomes dark, and he suppresses grief.

So is one brought up in ornaments while being during conflict unevident [attributed to Allah ]?

And they have made the angels, who are servants of the Most Merciful, females. Did they witness their creation? Their testimony will be recorded, and they will be questioned.

And they said, |If the Most Merciful had willed, we would not have worshipped them.| They have of that no knowledge. They are not but falsifying.

Or have We given them a book before the Qur'an to which they are adhering?

Rather, they say, |Indeed, we found our fathers upon a religion, and we are in their footsteps [rightly] guided.