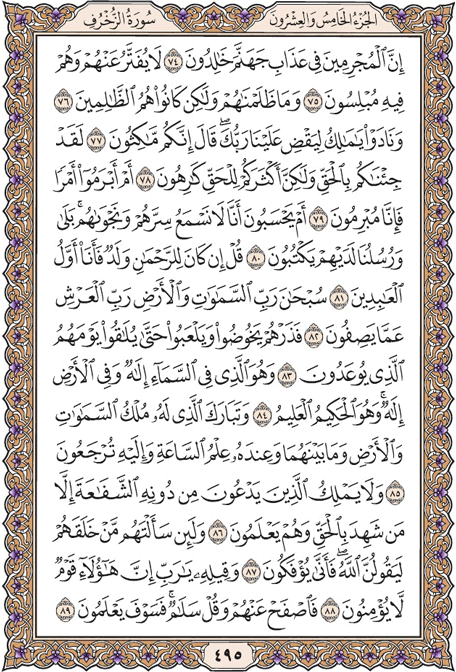 Indeed, the criminals will be in the punishment of Hell, abiding eternally.

It will not be allowed to subside for them, and they, therein, are in despair.

And We did not wrong them, but it was they who were the wrongdoers.

And they will call, |O Malik, let your Lord put an end to us!| He will say, |Indeed, you will remain.

We had certainly brought you the truth, but most of you, to the truth, were averse.

Or have they devised [some] affair? But indeed, We are devising [a plan].

Or do they think that We hear not their secrets and their private conversations? Yes, [We do], and Our messengers are with them recording.

Say, [O Muúammad], |If the Most Merciful had a son, then I would be the first of [his] worshippers.

Exalted is the Lord of the heavens and the earth, Lord of the Throne, above what they describe.

So leave them to converse vainly and amuse themselves until they meet their Day which they are promised.

And blessed is He to whom belongs the dominion of the heavens and the earth and whatever is between them and with whom is knowledge of the Hour and to whom you will be returned.

And those they invoke besides Him do not possess [power of] intercession; but only those who testify to the truth [can benefit], and they know.

And if you asked them who created them, they would surely say, | Allah .| So how are they deluded?

And [ Allah acknowledges] his saying, |O my Lord, indeed these are a people who do not believe.

So turn aside from them and say, |Peace.| But they are going to know.