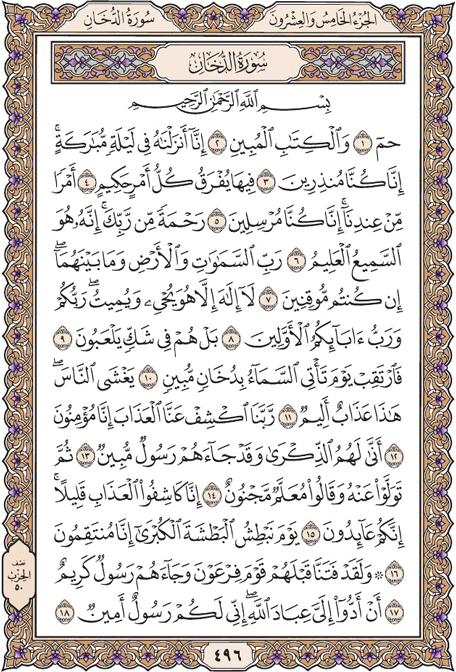 Indeed, We sent it down during a blessed night. Indeed, We were to warn [mankind].

On that night is made distinct every precise matter -

[Every] matter [proceeding] from Us. Indeed, We were to send [a messenger]

As mercy from your Lord. Indeed, He is the Hearing, the Knowing.

Lord of the heavens and the earth and that between them, if you would be certain.

There is no deity except Him; He gives life and causes death. [He is] your Lord and the Lord of your first forefathers.

But they are in doubt, amusing themselves.

Then watch for the Day when the sky will bring a visible smoke.

Covering the people; this is a painful torment.

[They will say], |Our Lord, remove from us the torment; indeed, we are believers.

How will there be for them a reminder [at that time]? And there had come to them a clear Messenger.

Then they turned away from him and said, |[He was] taught [and is] a madman.

Indeed, We will remove the torment for a little. Indeed, you [disbelievers] will return [to disbelief].

The Day We will strike with the greatest assault, indeed, We will take retribution.

And We had already tried before them the people of Pharaoh, and there came to them a noble messenger,

[Saying], |Render to me the servants of Allah . Indeed, I am to you a trustworthy messenger,|