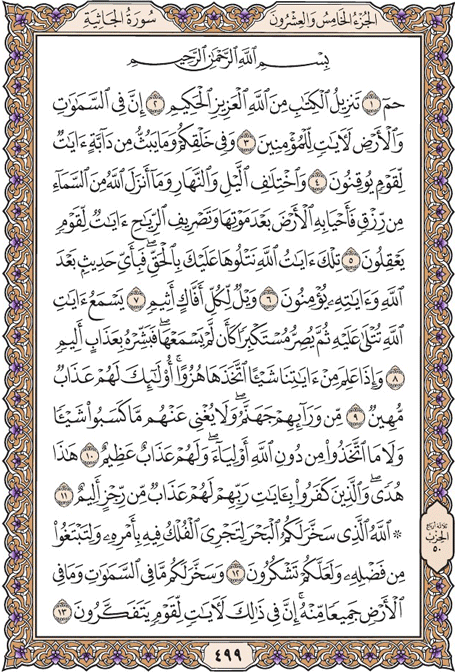 Indeed, within the heavens and earth are signs for the believers.

And in the creation of yourselves and what He disperses of moving creatures are signs for people who are certain [in faith].

And [in] the alternation of night and day and [in] what Allah sends down from the sky of provision and gives life thereby to the earth after its lifelessness and [in His] directing of the winds are signs for a people who reason.

These are the verses of Allah which We recite to you in truth. Then in what statement after Allah and His verses will they believe?

Woe to every sinful liar

Who hears the verses of Allah recited to him, then persists arrogantly as if he had not heard them. So give him tidings of a painful punishment.

And when he knows anything of Our verses, he takes them in ridicule. Those will have a humiliating punishment.

Before them is Hell, and what they had earned will not avail them at all nor what they had taken besides Allah as allies. And they will have a great punishment.

This [Qur'an] is guidance. And those who have disbelieved in the verses of their Lord will have a painful punishment of foul nature.

It is Allah who subjected to you the sea so that ships may sail upon it by His command and that you may seek of His bounty; and perhaps you will be grateful.

And He has subjected to you whatever is in the heavens and whatever is on the earth - all from Him. Indeed in that are signs for a people who give thought.