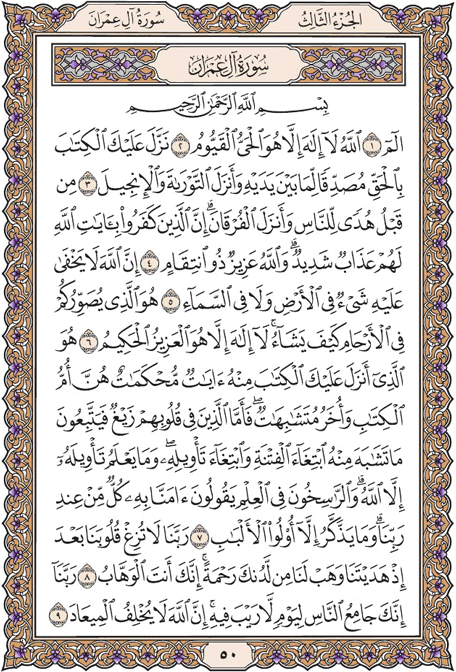 Allah - there is no deity except Him, the Ever-Living, the Sustainer of existence.

He has sent down upon you, [O Muúammad], the Book in truth, confirming what was before it. And He revealed the Torah and the Gospel.

Before, as guidance for the people. And He revealed the Qur'an. Indeed, those who disbelieve in the verses of Allah will have a severe punishment, and Allah is exalted in Might, the Owner of Retribution.

Indeed, from Allah nothing is hidden in the earth nor in the heaven.

It is He who forms you in the wombs however He wills. There is no deity except Him, the Exalted in Might, the Wise.

It is He who has sent down to you, [O Muúammad], the Book; in it are verses [that are] precise - they are the foundation of the Book - and others unspecific. As for those in whose hearts is deviation [from truth], they will follow that of it which is unspecific, seeking discord and seeking an interpretation [suitable to them]. And no one knows its [true] interpretation except Allah . But those firm in knowledge say, |We believe in it. All [of it] is from our Lord.| And no one will be reminded except those of understanding.

[Who say], |Our Lord, let not our hearts deviate after You have guided us and grant us from Yourself mercy. Indeed, You are the Bestower.

Our Lord, surely You will gather the people for a Day about which there is no doubt. Indeed, Allah does not fail in His promise.