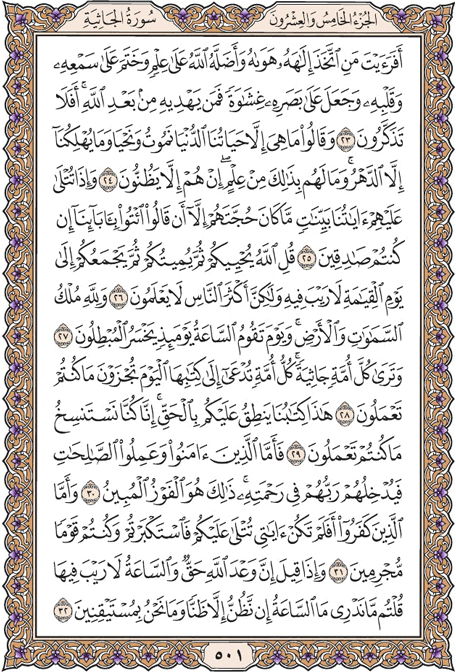 Have you seen he who has taken as his god his [own] desire, and Allah has sent him astray due to knowledge and has set a seal upon his hearing and his heart and put over his vision a veil? So who will guide him after Allah ? Then will you not be reminded?

And they say, |There is not but our worldly life; we die and live, and nothing destroys us except time.| And they have of that no knowledge; they are only assuming.

And when Our verses are recited to them as clear evidences, their argument is only that they say, |Bring [back] our forefathers, if you should be truthful.

Say, | Allah causes you to live, then causes you to die; then He will assemble you for the Day of Resurrection, about which there is no doubt, but most of the people do not know.

And to Allah belongs the dominion of the heavens and the earth. And the Day the Hour appears - that Day the falsifiers will lose.

And you will see every nation kneeling [from fear]. Every nation will be called to its record [and told], |Today you will be recompensed for what you used to do.

This, Our record, speaks about you in truth. Indeed, We were having transcribed whatever you used to do.

So as for those who believed and did righteous deeds, their Lord will admit them into His mercy. That is what is the clear attainment.

But as for those who disbelieved, [it will be said], |Were not Our verses recited to you, but you were arrogant and became a people of criminals?

And when it was said, 'Indeed, the promise of Allah is truth and the Hour [is coming] - no doubt about it,' you said, 'We know not what is the Hour. We assume only assumption, and we are not convinced.' |