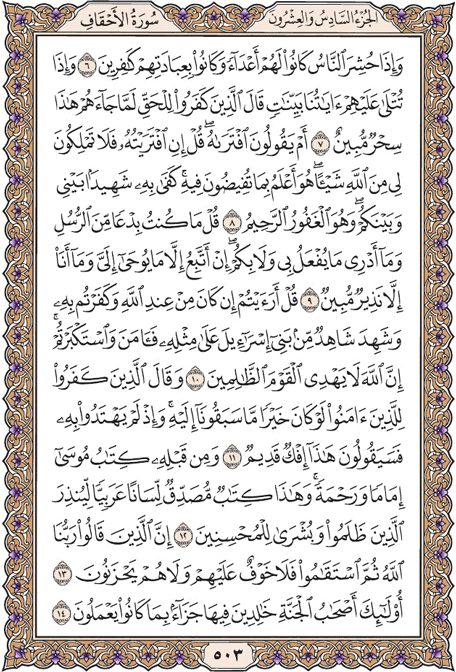 And when the people are gathered [that Day], they [who were invoked] will be enemies to them, and they will be deniers of their worship.

And when Our verses are recited to them as clear evidences, those who disbelieve say of the truth when it has come to them, |This is obvious magic.

Or do they say, |He has invented it?| Say, |If I have invented it, you will not possess for me [the power of protection] from Allah at all. He is most knowing of that in which you are involved. Sufficient is He as Witness between me and you, and He is the Forgiving the Merciful.

Say, |I am not something original among the messengers, nor do I know what will be done with me or with you. I only follow that which is revealed to me, and I am not but a clear warner.

Say, |Have you considered: if the Qur'an was from Allah , and you disbelieved in it while a witness from the Children of Israel has testified to something similar and believed while you were arrogant... ?| Indeed, Allah does not guide the wrongdoing people.

And those who disbelieve say of those who believe, |If it had [truly] been good, they would not have preceded us to it.| And when they are not guided by it, they will say, |This is an ancient falsehood.

And before it was the scripture of Moses to lead and as a mercy. And this is a confirming Book in an Arabic tongue to warn those who have wronged and as good tidings to the doers of good.

Indeed, those who have said, |Our Lord is Allah ,| and then remained on a right course - there will be no fear concerning them, nor will they grieve.

Those are the companions of Paradise, abiding eternally therein as reward for what they used to do.