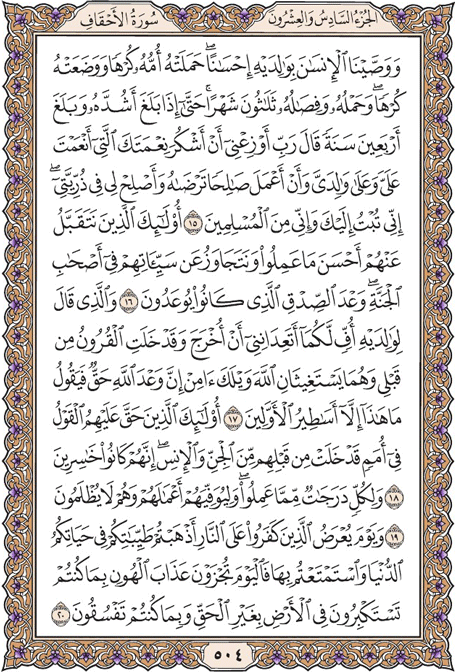 And We have enjoined upon man, to his parents, good treatment. His mother carried him with hardship and gave birth to him with hardship, and his gestation and weaning [period] is thirty months. [He grows] until, when he reaches maturity and reaches [the age of] forty years, he says, |My Lord, enable me to be grateful for Your favor which You have bestowed upon me and upon my parents and to work righteousness of which You will approve and make righteous for me my offspring. Indeed, I have repented to You, and indeed, I am of the Muslims.

Those are the ones from whom We will accept the best of what they did and overlook their misdeeds, [their being] among the companions of Paradise. [That is] the promise of truth which they had been promised.

But one who says to his parents, |Uff to you; do you promise me that I will be brought forth [from the earth] when generations before me have already passed on [into oblivion]?| while they call to Allah for help [and to their son], |Woe to you! Believe! Indeed, the promise of Allah is truth.| But he says, |This is not but legends of the former people| -

Those are the ones upon whom the word has come into effect, [who will be] among nations which had passed on before them of jinn and men. Indeed, they [all] were losers.

And for all there are degrees [of reward and punishment] for what they have done, and [it is] so that He may fully compensate them for their deeds, and they will not be wronged.

And the Day those who disbelieved are exposed to the Fire [it will be said], |You exhausted your pleasures during your worldly life and enjoyed them, so this Day you will be awarded the punishment of [extreme] humiliation because you were arrogant upon the earth without right and because you were defiantly disobedient.