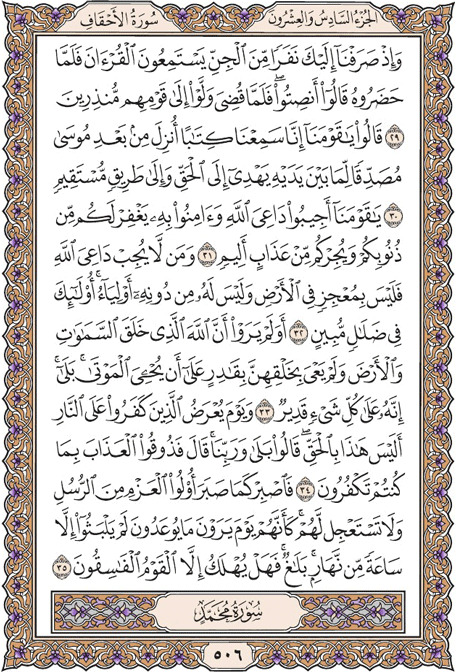 And [mention, O Muúammad], when We directed to you a few of the jinn, listening to the Qur'an. And when they attended it, they said, |Listen quietly.| And when it was concluded, they went back to their people as warners.

They said, |O our people, indeed we have heard a [recited] Book revealed after Moses confirming what was before it which guides to the truth and to a straight path.

O our people, respond to the Messenger of Allah and believe in him; Allah will forgive for you your sins and protect you from a painful punishment.

But he who does not respond to the Caller of Allah will not cause failure [to Him] upon earth, and he will not have besides Him any protectors. Those are in manifest error.

Do they not see that Allah , who created the heavens and earth and did not fail in their creation, is able to give life to the dead? Yes. Indeed, He is over all things competent.

And the Day those who disbelieved are exposed to the Fire [it will be said], |Is this not the truth?| They will say, |Yes, by our Lord.| He will say, |Then taste the punishment because you used to disbelieve.

So be patient, [O Muúammad], as were those of determination among the messengers and do not be impatient for them. It will be - on the Day they see that which they are promised - as though they had not remained [in the world] except an hour of a day. [This is] notification. And will [any] be destroyed except the defiantly disobedient people?