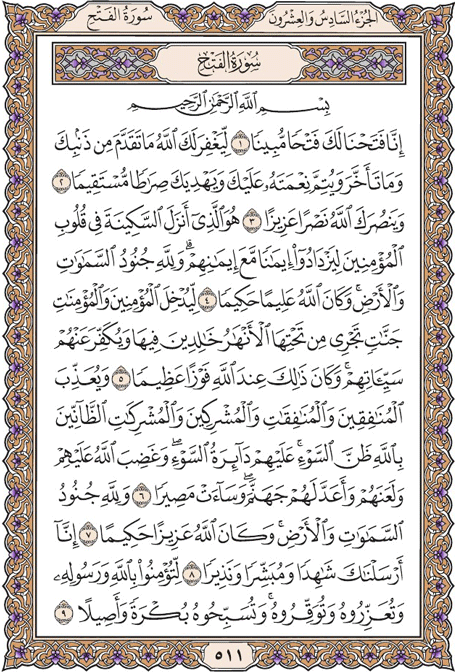 Indeed, We have given you, [O Muúammad], a clear conquest

And [that] Allah may aid you with a mighty victory.

It is He who sent down tranquillity into the hearts of the believers that they would increase in faith along with their [present] faith. And to Allah belong the soldiers of the heavens and the earth, and ever is Allah Knowing and Wise.

[And] that He may admit the believing men and the believing women to gardens beneath which rivers flow to abide therein eternally and remove from them their misdeeds - and ever is that, in the sight of Allah , a great attainment -

And [that] He may punish the hypocrite men and hypocrite women, and the polytheist men and polytheist women - those who assume about Allah an assumption of evil nature. Upon them is a misfortune of evil nature; and Allah has become angry with them and has cursed them and prepared for them Hell, and evil it is as a destination.

And to Allah belong the soldiers of the heavens and the earth. And ever is Allah Exalted in Might and Wise.

Indeed, We have sent you as a witness and a bringer of good tidings and a warner

That you [people] may believe in Allah and His Messenger and honor him and respect the Prophet and exalt Allah morning and afternoon.