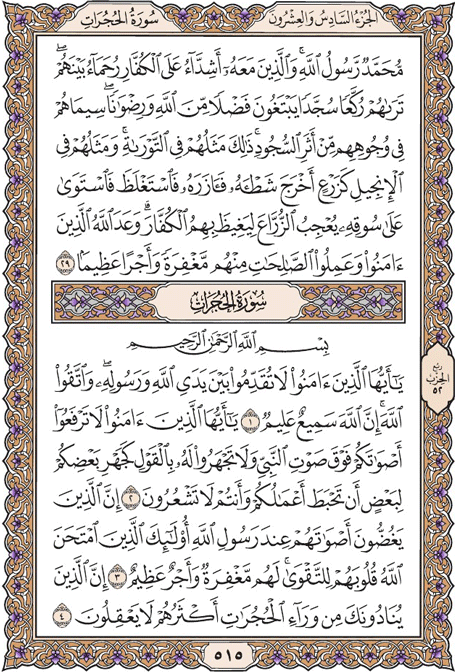 Muúammad is the Messenger of Allah ; and those with him are forceful against the disbelievers, merciful among themselves. You see them bowing and prostrating [in prayer], seeking bounty from Allah and [His] pleasure. Their mark is on their faces from the trace of prostration. That is their description in the Torah. And their description in the Gospel is as a plant which produces its offshoots and strengthens them so they grow firm and stand upon their stalks, delighting the sowers - so that Allah may enrage by them the disbelievers. Allah has promised those who believe and do righteous deeds among them forgiveness and a great reward.

O you who have believed, do not put [yourselves] before Allah and His Messenger but fear Allah . Indeed, Allah is Hearing and Knowing.

O you who have believed, do not raise your voices above the voice of the Prophet or be loud to him in speech like the loudness of some of you to others, lest your deeds become worthless while you perceive not.

Indeed, those who lower their voices before the Messenger of Allah - they are the ones whose hearts Allah has tested for righteousness. For them is forgiveness and great reward.

Indeed, those who call you, [O Muúammad], from behind the chambers - most of them do not use reason.