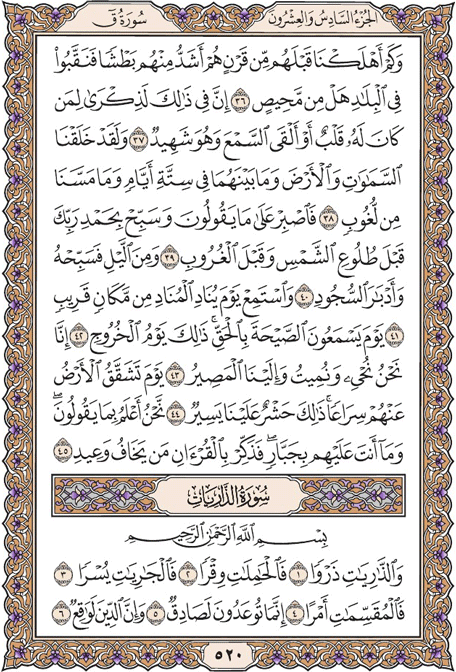 And how many a generation before them did We destroy who were greater than them in [striking] power and had explored throughout the lands. Is there any place of escape?

Indeed in that is a reminder for whoever has a heart or who listens while he is present [in mind].

And We did certainly create the heavens and earth and what is between them in six days, and there touched Us no weariness.

So be patient, [O Muúammad], over what they say and exalt [ Allah ] with praise of your Lord before the rising of the sun and before its setting,

And [in part] of the night exalt Him and after prostration.

The Day they will hear the blast [of the Horn] in truth. That is the Day of Emergence [from the graves].

Indeed, it is We who give life and cause death, and to Us is the destination

On the Day the earth breaks away from them [and they emerge] rapidly; that is a gathering easy for Us.

We are most knowing of what they say, and you are not over them a tyrant. But remind by the Qur'an whoever fears My threat.

By those [winds] scattering [dust] dispersing

And those [clouds] carrying a load [of water]

And those [ships] sailing with ease

And those [angels] apportioning [each] matter,

Indeed, what you are promised is true.

And indeed, the recompense is to occur.