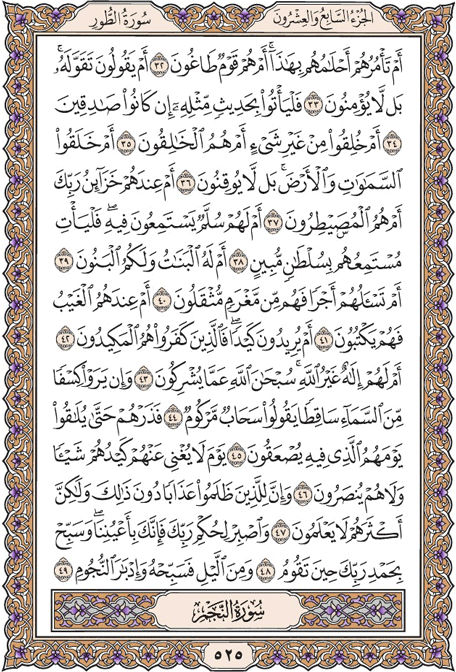 Or do their minds command them to [say] this, or are they a transgressing people?

Or do they say, |He has made it up|? Rather, they do not believe.

Then let them produce a statement like it, if they should be truthful.

Or were they created by nothing, or were they the creators [of themselves]?

Or did they create the heavens and the earth? Rather, they are not certain.

Or have they the depositories [containing the provision] of your Lord? Or are they the controllers [of them]?

Or have they a stairway [into the heaven] upon which they listen? Then let their listener produce a clear authority.

Or has He daughters while you have sons?

Or do you, [O Muúammad], ask of them a payment, so they are by debt burdened down?

Or do they intend a plan? But those who disbelieve - they are the object of a plan.

Or have they a deity other than Allah ? Exalted is Allah above whatever they associate with Him.

And if they were to see a fragment from the sky falling, they would say, |[It is merely] clouds heaped up.

The Day their plan will not avail them at all, nor will they be helped.

And indeed, for those who have wronged is a punishment before that, but most of them do not know.

And be patient, [O Muúammad], for the decision of your Lord, for indeed, you are in Our eyes. And exalt [ Allah ] with praise of your Lord when you arise.

And in a part of the night exalt Him and after [the setting of] the stars.