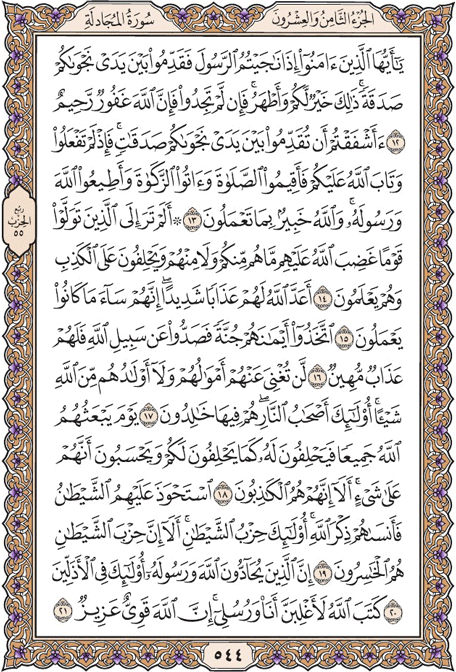 O you who have believed, when you [wish to] privately consult the Messenger, present before your consultation a charity. That is better for you and purer. But if you find not [the means] - then indeed, Allah is Forgiving and Merciful.

Have you feared to present before your consultation charities? Then when you do not and Allah has forgiven you, then [at least] establish prayer and give zakah and obey Allah and His Messenger. And Allah is Acquainted with what you do.

Have you not considered those who make allies of a people with whom Allah has become angry? They are neither of you nor of them, and they swear to untruth while they know [they are lying].

Allah has prepared for them a severe punishment. Indeed, it was evil that they were doing.

They took their [false] oaths as a cover, so they averted [people] from the way of Allah , and for them is a humiliating punishment.

Never will their wealth or their children avail them against Allah at all. Those are the companions of the Fire; they will abide therein eternally

On the Day Allah will resurrect them all, and they will swear to Him as they swear to you and think that they are [standing] on something. Unquestionably, it is they who are the liars.

Indeed, the ones who oppose Allah and His Messenger - those will be among the most humbled.

Allah has written, |I will surely overcome, I and My messengers.| Indeed, Allah is Powerful and Exalted in Might.