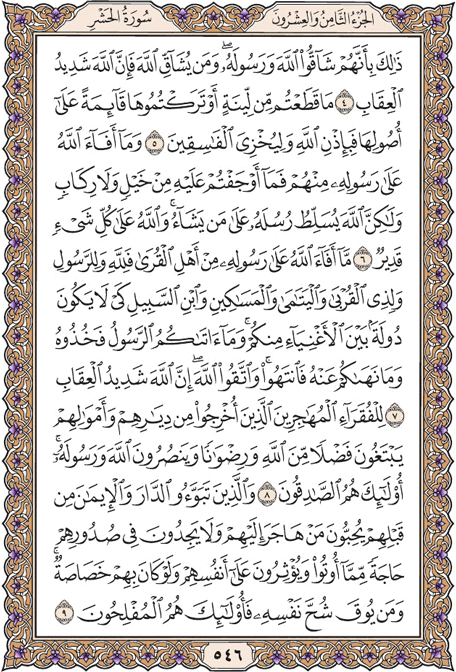 That is because they opposed Allah and His Messenger. And whoever opposes Allah - then indeed, Allah is severe in penalty.

Whatever you have cut down of [their] palm trees or left standing on their trunks - it was by permission of Allah and so He would disgrace the defiantly disobedient.

And what Allah restored [of property] to His Messenger from them - you did not spur for it [in an expedition] any horses or camels, but Allah gives His messengers power over whom He wills, and Allah is over all things competent.

And what Allah restored to His Messenger from the people of the towns - it is for Allah and for the Messenger and for [his] near relatives and orphans and the [stranded] traveler - so that it will not be a perpetual distribution among the rich from among you. And whatever the Messenger has given you - take; and what he has forbidden you - refrain from. And fear Allah ; indeed, Allah is severe in penalty.

For the poor emigrants who were expelled from their homes and their properties, seeking bounty from Allah and [His] approval and supporting Allah and His Messenger, [there is also a share]. Those are the truthful.

And [also for] those who were settled in al-Madinah and [adopted] the faith before them. They love those who emigrated to them and find not any want in their breasts of what the emigrants were given but give [them] preference over themselves, even though they are in privation. And whoever is protected from the stinginess of his soul - it is those who will be the successful.