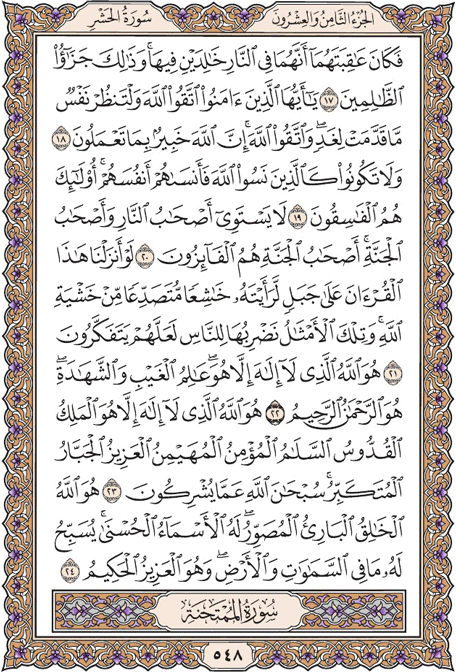 So the outcome for both of them is that they will be in the Fire, abiding eternally therein. And that is the recompense of the wrong-doers.

O you who have believed, fear Allah . And let every soul look to what it has put forth for tomorrow - and fear Allah . Indeed, Allah is Acquainted with what you do.

And be not like those who forgot Allah , so He made them forget themselves. Those are the defiantly disobedient.

If We had sent down this Qur'an upon a mountain, you would have seen it humbled and coming apart from fear of Allah . And these examples We present to the people that perhaps they will give thought.

He is Allah , other than whom there is no deity, Knower of the unseen and the witnessed. He is the Entirely Merciful, the Especially Merciful.

He is Allah , other than whom there is no deity, the Sovereign, the Pure, the Perfection, the Bestower of Faith, the Overseer, the Exalted in Might, the Compeller, the Superior. Exalted is Allah above whatever they associate with Him.

He is Allah , the Creator, the Inventor, the Fashioner; to Him belong the best names. Whatever is in the heavens and earth is exalting Him. And He is the Exalted in Might, the Wise.