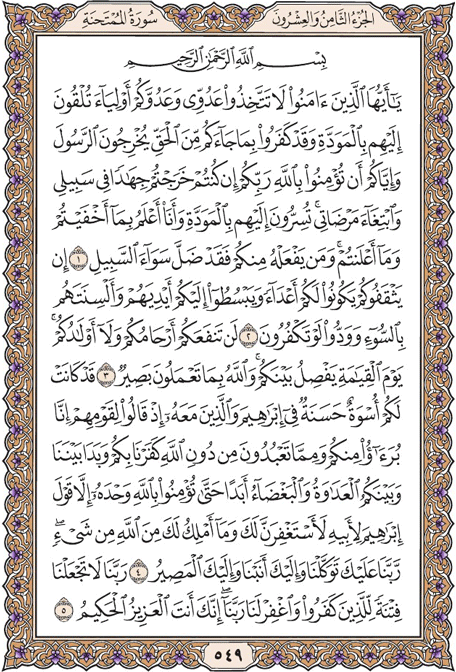 O you who have believed, do not take My enemies and your enemies as allies, extending to them affection while they have disbelieved in what came to you of the truth, having driven out the Prophet and yourselves [only] because you believe in Allah , your Lord. If you have come out for jihad in My cause and seeking means to My approval, [take them not as friends]. You confide to them affection, but I am most knowing of what you have concealed and what you have declared. And whoever does it among you has certainly strayed from the soundness of the way.

If they gain dominance over you, they would be to you as enemies and extend against you their hands and their tongues with evil, and they wish you would disbelieve.

Never will your relatives or your children benefit you; the Day of Resurrection He will judge between you. And Allah , of what you do, is Seeing.

There has already been for you an excellent pattern in Abraham and those with him, when they said to their people, |Indeed, we are disassociated from you and from whatever you worship other than Allah . We have denied you, and there has appeared between us and you animosity and hatred forever until you believe in Allah alone| except for the saying of Abraham to his father, |I will surely ask forgiveness for you, but I have not [power to do] for you anything against Allah . Our Lord, upon You we have relied, and to You we have returned, and to You is the destination.

Our Lord, make us not [objects of] torment for the disbelievers and forgive us, our Lord. Indeed, it is You who is the Exalted in Might, the Wise.