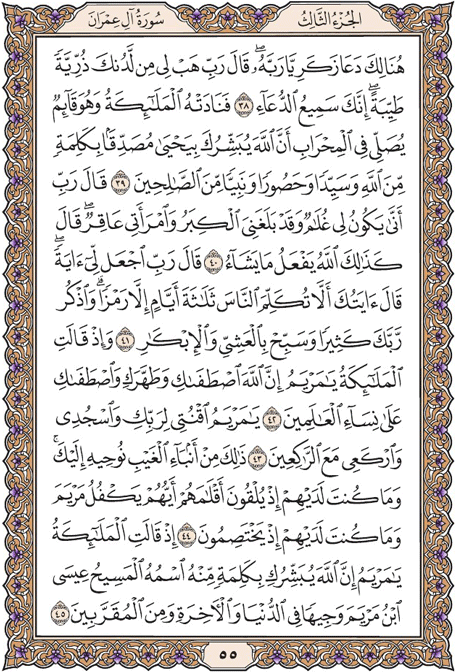 At that, Zechariah called upon his Lord, saying, |My Lord, grant me from Yourself a good offspring. Indeed, You are the Hearer of supplication.

So the angels called him while he was standing in prayer in the chamber, |Indeed, Allah gives you good tidings of John, confirming a word from Allah and [who will be] honorable, abstaining [from women], and a prophet from among the righteous.

He said, |My Lord, how will I have a boy when I have reached old age and my wife is barren?| The angel said, |Such is Allah ; He does what He wills.

He said, |My Lord, make for me a sign.| He Said, |Your sign is that you will not [be able to] speak to the people for three days except by gesture. And remember your Lord much and exalt [Him with praise] in the evening and the morning.

And [mention] when the angels said, |O Mary, indeed Allah has chosen you and purified you and chosen you above the women of the worlds.

O Mary, be devoutly obedient to your Lord and prostrate and bow with those who bow [in prayer].

[And mention] when the angels said, |O Mary, indeed Allah gives you good tidings of a word from Him, whose name will be the Messiah, Jesus, the son of Mary - distinguished in this world and the Hereafter and among those brought near [to Allah ].