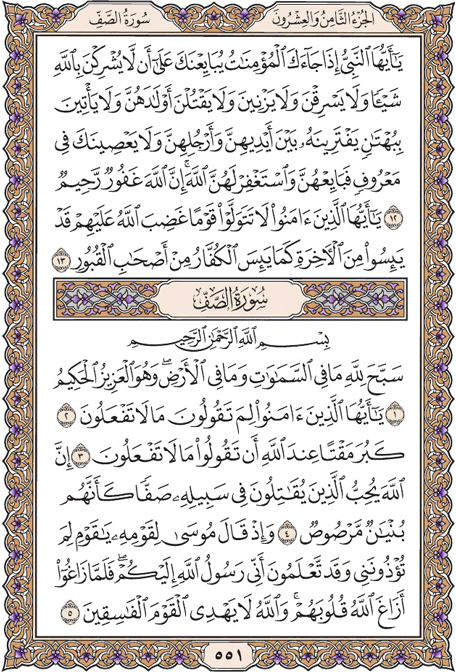 O Prophet, when the believing women come to you pledging to you that they will not associate anything with Allah , nor will they steal, nor will they commit unlawful sexual intercourse, nor will they kill their children, nor will they bring forth a slander they have invented between their arms and legs, nor will they disobey you in what is right - then accept their pledge and ask forgiveness for them of Allah . Indeed, Allah is Forgiving and Merciful.

O you who have believed, why do you say what you do not do?

Great is hatred in the sight of Allah that you say what you do not do.

Indeed, Allah loves those who fight in His cause in a row as though they are a [single] structure joined firmly.

And [mention, O Muúammad], when Moses said to his people, |O my people, why do you harm me while you certainly know that I am the messenger of Allah to you?| And when they deviated, Allah caused their hearts to deviate. And Allah does not guide the defiantly disobedient people.