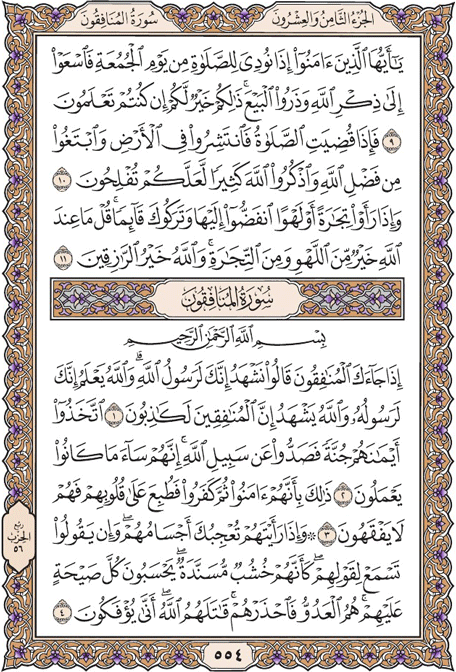 O you who have believed, when [the adhan] is called for the prayer on the day of Jumu'ah [Friday], then proceed to the remembrance of Allah and leave trade. That is better for you, if you only knew.

And when the prayer has been concluded, disperse within the land and seek from the bounty of Allah , and remember Allah often that you may succeed.

But when they saw a transaction or a diversion, [O Muúammad], they rushed to it and left you standing. Say, |What is with Allah is better than diversion and than a transaction, and Allah is the best of providers.

They have taken their oaths as a cover, so they averted [people] from the way of Allah . Indeed, it was evil that they were doing.

That is because they believed, and then they disbelieved; so their hearts were sealed over, and they do not understand.

And when you see them, their forms please you, and if they speak, you listen to their speech. [They are] as if they were pieces of wood propped up - they think that every shout is against them. They are the enemy, so beware of them. May Allah destroy them; how are they deluded?