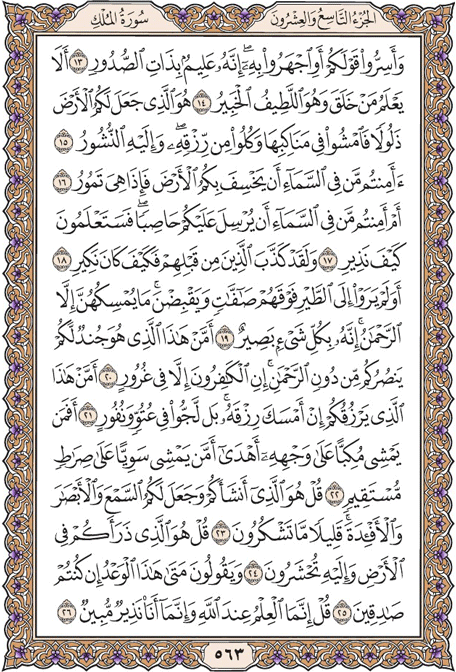 And conceal your speech or publicize it; indeed, He is Knowing of that within the breasts.

Does He who created not know, while He is the Subtle, the Acquainted?

It is He who made the earth tame for you - so walk among its slopes and eat of His provision - and to Him is the resurrection.

Do you feel secure that He who [holds authority] in the heaven would not cause the earth to swallow you and suddenly it would sway?

Or do you feel secure that He who [holds authority] in the heaven would not send against you a storm of stones? Then you would know how [severe] was My warning.

And already had those before them denied, and how [terrible] was My reproach.

Do they not see the birds above them with wings outspread and [sometimes] folded in? None holds them [aloft] except the Most Merciful. Indeed He is, of all things, Seeing.

Or who is it that could be an army for you to aid you other than the Most Merciful? The disbelievers are not but in delusion.

Or who is it that could provide for you if He withheld His provision? But they have persisted in insolence and aversion.

Say, |It is He who has produced you and made for you hearing and vision and hearts; little are you grateful.

Say, | It is He who has multiplied you throughout the earth, and to Him you will be gathered.

Say, |The knowledge is only with Allah , and I am only a clear warner.