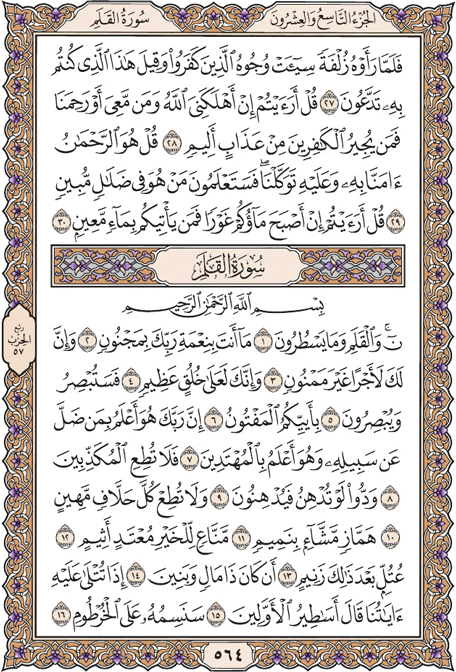 But when they see it approaching, the faces of those who disbelieve will be distressed, and it will be said, |This is that for which you used to call.

Say, [O Muúammad], |Have you considered: whether Allah should cause my death and those with me or have mercy upon us, who can protect the disbelievers from a painful punishment?|

Say, |He is the Most Merciful; we have believed in Him, and upon Him we have relied. And you will [come to] know who it is that is in clear error.

Say, |Have you considered: if your water was to become sunken [into the earth], then who could bring you flowing water?|

Nun. By the pen and what they inscribe,

You are not, [O Muúammad], by the favor of your Lord, a madman.

And indeed, for you is a reward uninterrupted.

And indeed, you are of a great moral character.

So you will see and they will see

Which of you is the afflicted [by a devil].

[And] scorner, going about with malicious gossip -

A preventer of good, transgressing and sinful,

Cruel, moreover, and an illegitimate pretender.

Because he is a possessor of wealth and children,

We will brand him upon the snout.

Then do not obey the deniers.

And do not obey every worthless habitual swearer