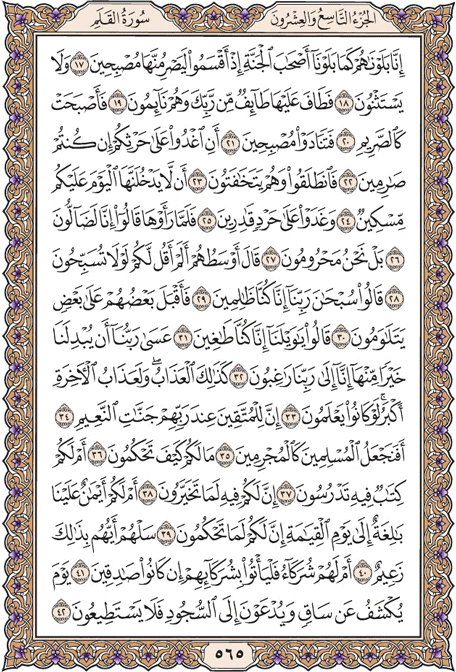 So they set out, while lowering their voices,

[Saying], |There will surely not enter it today upon you [any] poor person.

And they went early in determination, [assuming themselves] able.

But when they saw it, they said, |Indeed, we are lost;

Rather, we have been deprived.

They said, |Exalted is our Lord! Indeed, we were wrongdoers.

Then they approached one another, blaming each other.

They said, |O woe to us; indeed we were transgressors.

Perhaps our Lord will substitute for us [one] better than it. Indeed, we are toward our Lord desirous.

Indeed, for the righteous with their Lord are the Gardens of Pleasure.

Then will We treat the Muslims like the criminals?

And they called one another at morning,

[Saying], |Go early to your crop if you would cut the fruit.

Indeed, We have tried them as We tried the companions of the garden, when they swore to cut its fruit in the [early] morning

That indeed for you is whatever you choose?

Or do you have oaths [binding] upon Us, extending until the Day of Resurrection, that indeed for you is whatever you judge?

Ask them which of them, for that [claim], is responsible.

Or do they have partners? Then let them bring their partners, if they should be truthful.

The Day the shin will be uncovered and they are invited to prostration but the disbelievers will not be able,

So there came upon the garden an affliction from your Lord while they were asleep.

And it became as though reaped.

What is [the matter] with you? How do you judge?

Or do you have a scripture in which you learn