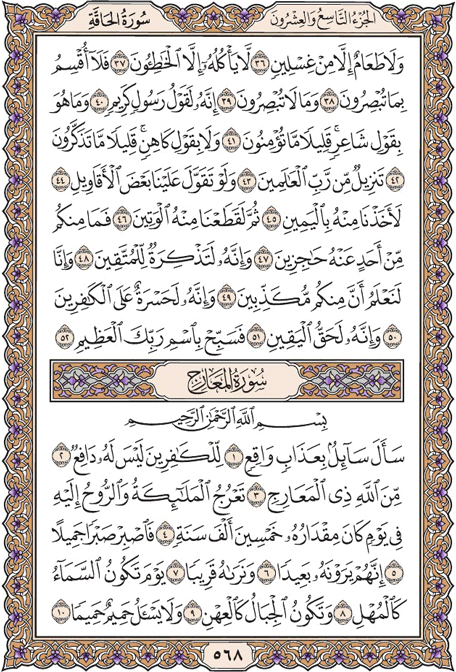 [That] indeed, the Qur'an is the word of a noble Messenger.

And it is not the word of a poet; little do you believe.

Nor the word of a soothsayer; little do you remember.

[It is] a revelation from the Lord of the worlds.

And if Muúammad had made up about Us some [false] sayings,

We would have seized him by the right hand;

Then We would have cut from him the aorta.

And there is no one of you who could prevent [Us] from him.

And indeed, the Qur'an is a reminder for the righteous.

Indeed, they see it [as] distant,

And indeed, We know that among you are deniers.

And indeed, it will be [a cause of] regret upon the disbelievers.

And indeed, it is the truth of certainty.

To the disbelievers; of it there is no preventer.

[It is] from Allah , owner of the ways of ascent.

The angels and the Spirit will ascend to Him during a Day the extent of which is fifty thousand years.

So be patient with gracious patience.

Nor any food except from the discharge of wounds;

None will eat it except the sinners.

So I swear by what you see

And what you do not see

On the Day the sky will be like murky oil,

So exalt the name of your Lord, the Most Great.

A supplicant asked for a punishment bound to happen

And no friend will ask [anything of] a friend,