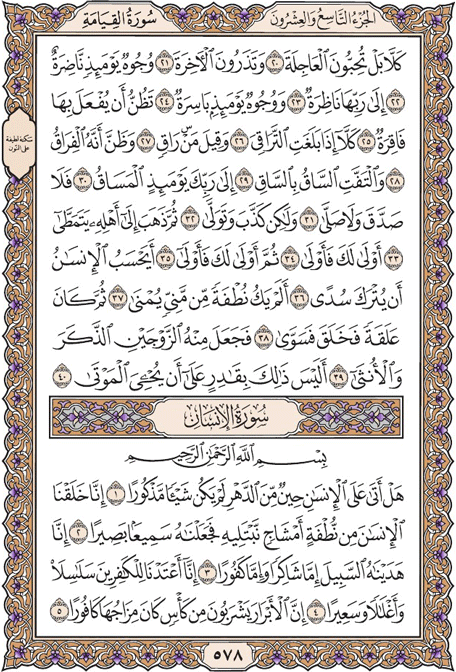 Indeed, the righteous will drink from a cup [of wine] whose mixture is of Kafur,

Indeed, We have prepared for the disbelievers chains and shackles and a blaze.

No! But you love the immediate

And leave the Hereafter.

[Some] faces, that Day, will be radiant,

Looking at their Lord.

And [some] faces, that Day, will be contorted,

Expecting that there will be done to them [something] backbreaking.

No! When the soul has reached the collar bones

And the leg is wound about the leg,

To your Lord, that Day, will be the procession.

And the disbeliever had not believed, nor had he prayed.

But [instead], he denied and turned away.

And then he went to his people, swaggering [in pride].

Woe to you, and woe!

Then woe to you, and woe!

Does man think that he will be left neglected?

Had he not been a sperm from semen emitted?

Then he was a clinging clot, and [ Allah ] created [his form] and proportioned [him]

And made of him two mates, the male and the female.

Is not that [Creator] Able to give life to the dead?

Has there [not] come upon man a period of time when he was not a thing [even] mentioned?

Indeed, We created man from a sperm-drop mixture that We may try him; and We made him hearing and seeing.

Indeed, We guided him to the way, be he grateful or be he ungrateful.