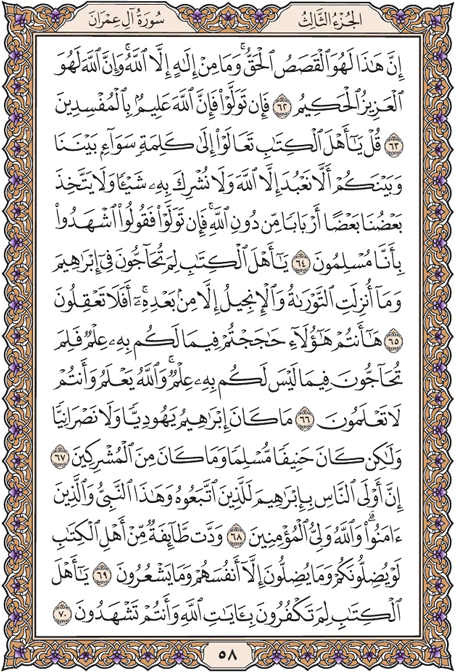 Indeed, this is the true narration. And there is no deity except Allah . And indeed, Allah is the Exalted in Might, the Wise.

But if they turn away, then indeed - Allah is Knowing of the corrupters.

Say, |O People of the Scripture, come to a word that is equitable between us and you - that we will not worship except Allah and not associate anything with Him and not take one another as lords instead of Allah .| But if they turn away, then say, |Bear witness that we are Muslims [submitting to Him].

O People of the Scripture, why do you argue about Abraham while the Torah and the Gospel were not revealed until after him? Then will you not reason?

Abraham was neither a Jew nor a Christian, but he was one inclining toward truth, a Muslim [submitting to Allah ]. And he was not of the polytheists.

Indeed, the most worthy of Abraham among the people are those who followed him [in submission to Allah ] and this prophet, and those who believe [in his message]. And Allah is the ally of the believers.

A faction of the people of the Scripture wish they could mislead you. But they do not mislead except themselves, and they perceive [it] not.

O People of the Scripture, why do you disbelieve in the verses of Allah while you witness [to their truth]?