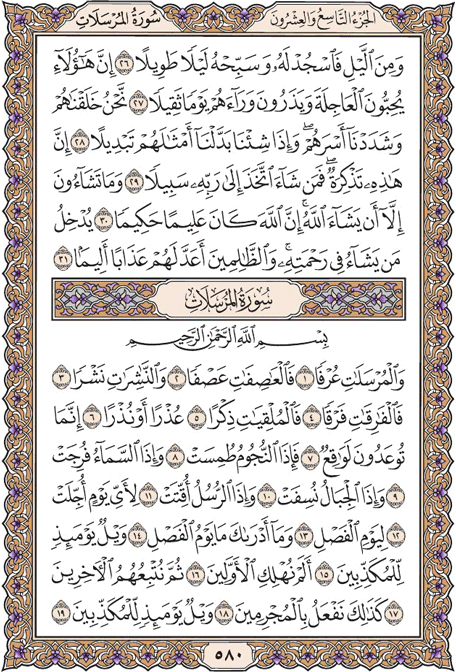 Did We not destroy the former peoples?

Then We will follow them with the later ones.

Thus do We deal with the criminals.

And [by] the winds that spread [clouds]

And during the night prostrate to Him and exalt Him a long [part of the] night.

Indeed, these [disbelievers] love the immediate and leave behind them a grave Day.

We have created them and strengthened their forms, and when We will, We can change their likenesses with [complete] alteration.

Indeed, this is a reminder, so he who wills may take to his Lord a way.

And you do not will except that Allah wills. Indeed, Allah is ever Knowing and Wise.

He admits whom He wills into His mercy; but the wrongdoers - He has prepared for them a painful punishment.

By those [winds] sent forth in gusts

And the winds that blow violently

So when the stars are obliterated

And when the heaven is opened

And when the mountains are blown away

And when the messengers' time has come...

And those [angels] who bring criterion

And those [angels] who deliver a message

As justification or warning,

Indeed, what you are promised is to occur.

For what Day was it postponed?

For the Day of Judgement.

And what can make you know what is the Day of Judgement?