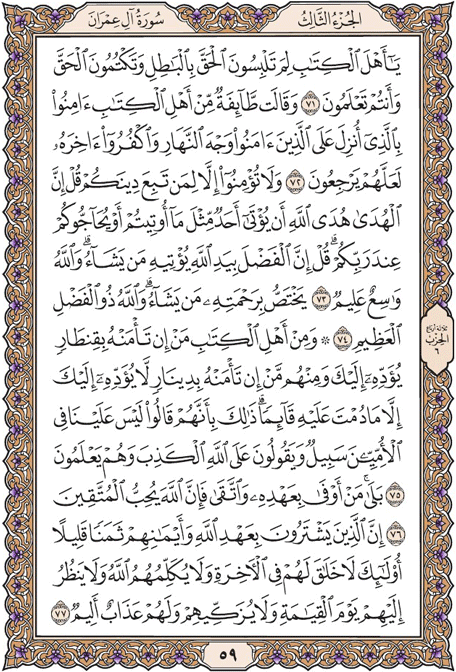 O People of the Scripture, why do you confuse the truth with falsehood and conceal the truth while you know [it]?

And a faction of the People of the Scripture say [to each other], |Believe in that which was revealed to the believers at the beginning of the day and reject it at its end that perhaps they will abandon their religion,

And do not trust except those who follow your religion.| Say, |Indeed, the [true] guidance is the guidance of Allah . [Do you fear] lest someone be given [knowledge] like you were given or that they would [thereby] argue with you before your Lord?| Say, |Indeed, [all] bounty is in the hand of Allah - He grants it to whom He wills. And Allah is all-Encompassing and Wise.

He selects for His mercy whom He wills. And Allah is the possessor of great bounty.

But yes, whoever fulfills his commitment and fears Allah - then indeed, Allah loves those who fear Him.

Indeed, those who exchange the covenant of Allah and their [own] oaths for a small price will have no share in the Hereafter, and Allah will not speak to them or look at them on the Day of Resurrection, nor will He purify them; and they will have a painful punishment.