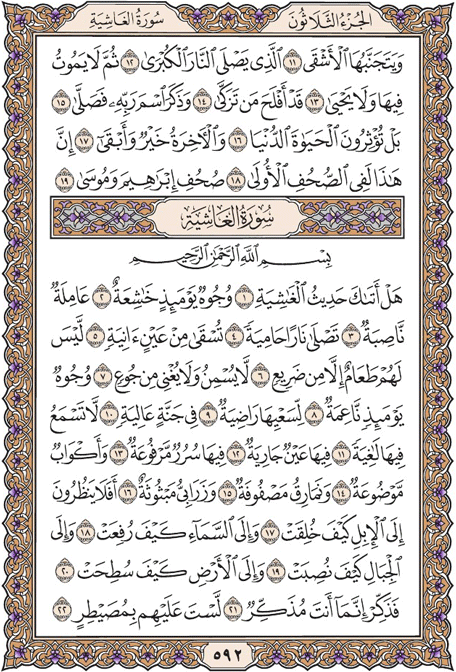 And cushions lined up

And at the sky - how it is raised?

And at the mountains - how they are erected?

And at the earth - how it is spread out?

So remind, [O Muúammad]; you are only a reminder.

You are not over them a controller.

They will be given drink from a boiling spring.

For them there will be no food except from a poisonous, thorny plant

Which neither nourishes nor avails against hunger.

[Other] faces, that Day, will show pleasure.

With their effort [they are] satisfied

Wherein they will hear no unsuitable speech.

And carpets spread around.

Then do they not look at the camels - how they are created?

But the wretched one will avoid it -

[He] who will [enter and] burn in the greatest Fire,

Neither dying therein nor living.

He has certainly succeeded who purifies himself

And mentions the name of his Lord and prays.

But you prefer the worldly life,

While the Hereafter is better and more enduring.

Indeed, this is in the former scriptures,

The scriptures of Abraham and Moses.

Has there reached you the report of the Overwhelming [event]?

[Some] faces, that Day, will be humbled,

They will [enter to] burn in an intensely hot Fire.

Within it is a flowing spring.

Within it are couches raised high

And cups put in place