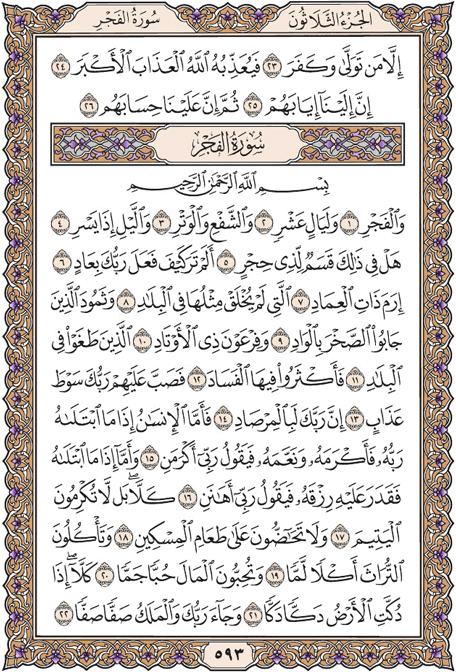 No! But you do not honor the orphan

And you do not encourage one another to feed the poor.

And you consume inheritance, devouring [it] altogether,

And you love wealth with immense love.

No! When the earth has been leveled - pounded and crushed -

And your Lord has come and the angels, rank upon rank,

However, he who turns away and disbelieves -

Then Allah will punish him with the greatest punishment.

Indeed, to Us is their return.

And [by] the even [number] and the odd

And [by] the night when it passes,

Is there [not] in [all] that an oath [sufficient] for one of perception?

Have you not considered how your Lord dealt with 'Aad -

[With] Iram - who had lofty pillars,

So your Lord poured upon them a scourge of punishment.

Indeed, your Lord is in observation.

And as for man, when his Lord tries him and [thus] is generous to him and favors him, he says, |My Lord has honored me.

The likes of whom had never been created in the land?

And [with] Thamud, who carved out the rocks in the valley?

And [with] Pharaoh, owner of the stakes? -

[All of] whom oppressed within the lands

And increased therein the corruption.

And [by] ten nights

But when He tries him and restricts his provision, he says, |My Lord has humiliated me.