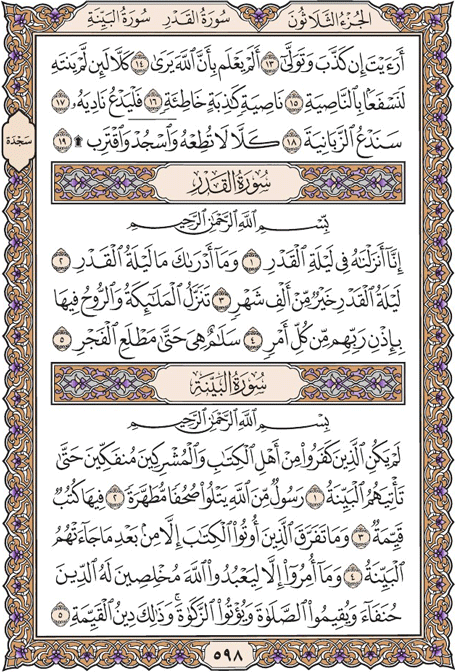 Have you seen if he denies and turns away -

Does he not know that Allah sees?

No! If he does not desist, We will surely drag him by the forelock -

Then let him call his associates;

We will call the angels of Hell.

No! Do not obey him. But prostrate and draw near [to Allah ].

Indeed, We sent the Qur'an down during the Night of Decree.

And what can make you know what is the Night of Decree?

The Night of Decree is better than a thousand months.

The angels and the Spirit descend therein by permission of their Lord for every matter.

Peace it is until the emergence of dawn.

Within which are correct writings.

Nor did those who were given the Scripture become divided until after there had come to them clear evidence.

And they were not commanded except to worship Allah , [being] sincere to Him in religion, inclining to truth, and to establish prayer and to give zakah. And that is the correct religion.