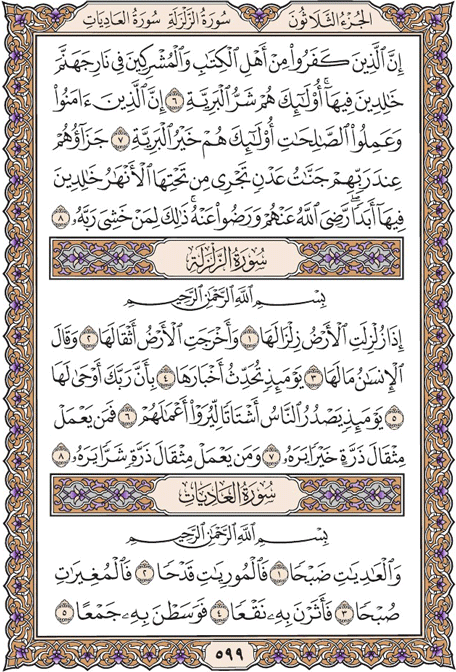 Indeed, they who disbelieved among the People of the Scripture and the polytheists will be in the fire of Hell, abiding eternally therein. Those are the worst of creatures.

Indeed, they who have believed and done righteous deeds - those are the best of creatures.

Their reward with Allah will be gardens of perpetual residence beneath which rivers flow, wherein they will abide forever, Allah being pleased with them and they with Him. That is for whoever has feared his Lord.

When the earth is shaken with its [final] earthquake

And the earth discharges its burdens

That Day, it will report its news

Because your Lord has commanded it.

That Day, the people will depart separated [into categories] to be shown [the result of] their deeds.

So whoever does an atom's weight of good will see it,

And whoever does an atom's weight of evil will see it.

By the racers, panting,

And the producers of sparks [when] striking

And the chargers at dawn,

Stirring up thereby [clouds of] dust,

Arriving thereby in the center collectively,