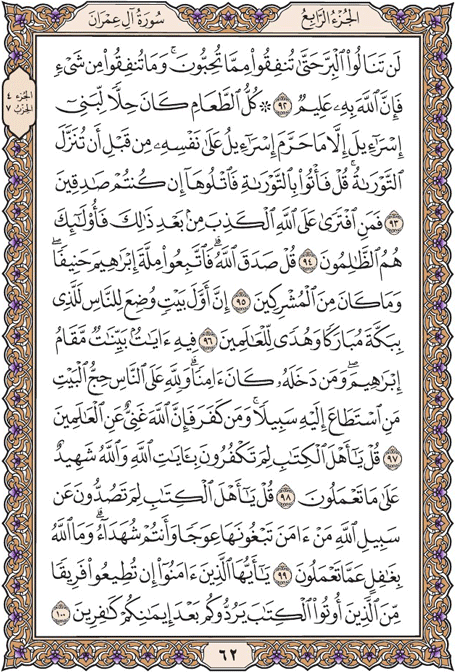 Never will you attain the good [reward] until you spend [in the way of Allah ] from that which you love. And whatever you spend - indeed, Allah is Knowing of it.

All food was lawful to the Children of Israel except what Israel had made unlawful to himself before the Torah was revealed. Say, [O Muúammad], |So bring the Torah and recite it, if you should be truthful.

And whoever invents about Allah untruth after that - then those are [truly] the wrongdoers.

Say, | Allah has told the truth. So follow the religion of Abraham, inclining toward truth; and he was not of the polytheists.

Indeed, the first House [of worship] established for mankind was that at Makkah - blessed and a guidance for the worlds.

In it are clear signs [such as] the standing place of Abraham. And whoever enters it shall be safe. And [due] to Allah from the people is a pilgrimage to the House - for whoever is able to find thereto a way. But whoever disbelieves - then indeed, Allah is free from need of the worlds.

Say, |O People of the Scripture, why do you disbelieve in the verses of Allah while Allah is Witness over what you do?|

Say, |O People of the Scripture, why do you avert from the way of Allah those who believe, seeking to make it [seem] deviant, while you are witnesses [to the truth]? And Allah is not unaware of what you do.

O you who have believed, if you obey a party of those who were given the Scripture, they would turn you back, after your belief, [to being] unbelievers.