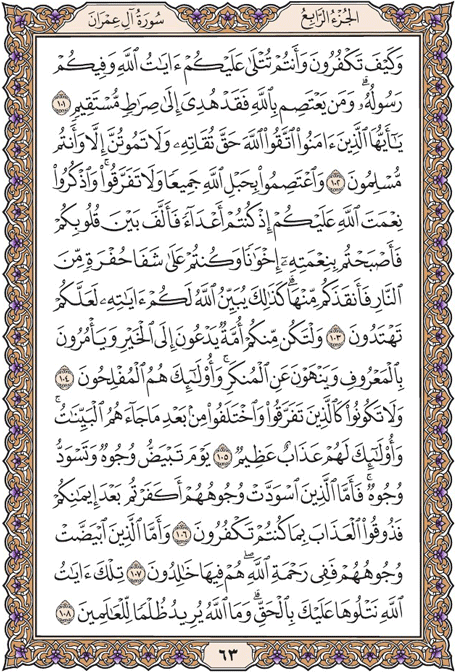 And how could you disbelieve while to you are being recited the verses of Allah and among you is His Messenger? And whoever holds firmly to Allah has [indeed] been guided to a straight path.

O you who have believed, fear Allah as He should be feared and do not die except as Muslims [in submission to Him].

And hold firmly to the rope of Allah all together and do not become divided. And remember the favor of Allah upon you - when you were enemies and He brought your hearts together and you became, by His favor, brothers. And you were on the edge of a pit of the Fire, and He saved you from it. Thus does Allah make clear to you His verses that you may be guided.

And let there be [arising] from you a nation inviting to [all that is] good, enjoining what is right and forbidding what is wrong, and those will be the successful.

And do not be like the ones who became divided and differed after the clear proofs had come to them. And those will have a great punishment.

But as for those whose faces will turn white, [they will be] within the mercy of Allah . They will abide therein eternally.

These are the verses of Allah . We recite them to you, [O Muúammad], in truth; and Allah wants no injustice to the worlds.