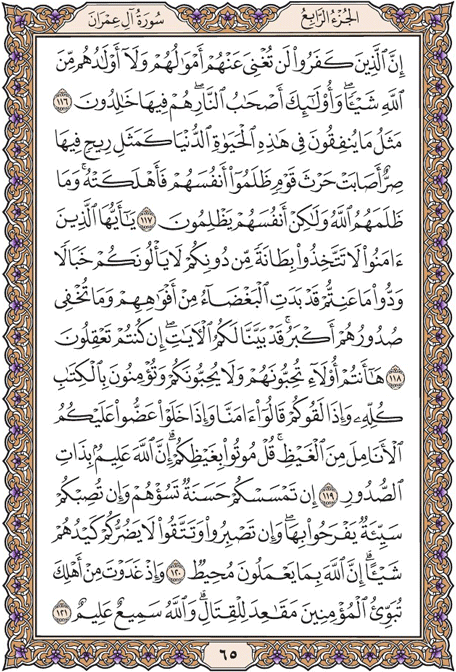 Indeed, those who disbelieve - never will their wealth or their children avail them against Allah at all, and those are the companions of the Fire; they will abide therein eternally.

The example of what they spend in this worldly life is like that of a wind containing frost which strikes the harvest of a people who have wronged themselves and destroys it. And Allah has not wronged them, but they wrong themselves.

O you who have believed, do not take as intimates those other than yourselves, for they will not spare you [any] ruin. They wish you would have hardship. Hatred has already appeared from their mouths, and what their breasts conceal is greater. We have certainly made clear to you the signs, if you will use reason.

Here you are loving them but they are not loving you, while you believe in the Scripture - all of it. And when they meet you, they say, |We believe.| But when they are alone, they bite their fingertips at you in rage. Say, |Die in your rage. Indeed, Allah is Knowing of that within the breasts.

If good touches you, it distresses them; but if harm strikes you, they rejoice at it. And if you are patient and fear Allah , their plot will not harm you at all. Indeed, Allah is encompassing of what they do.

And [remember] when you, [O Muúammad], left your family in the morning to post the believers at their stations for the battle [of Uúud] - and Allah is Hearing and Knowing -