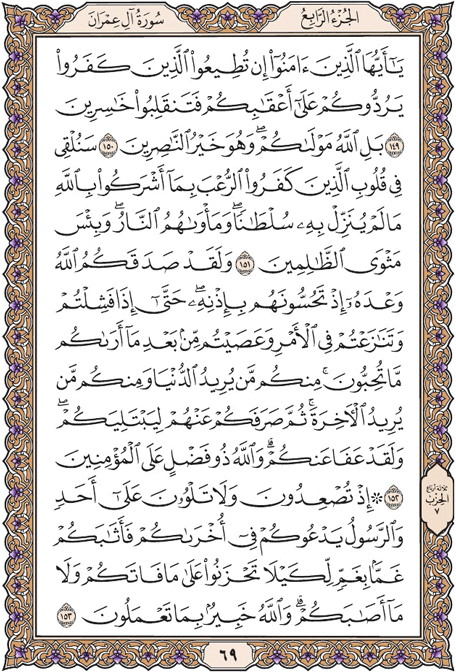 O you who have believed, if you obey those who disbelieve, they will turn you back on your heels, and you will [then] become losers.

But Allah is your protector, and He is the best of helpers.

We will cast terror into the hearts of those who disbelieve for what they have associated with Allah of which He had not sent down [any] authority. And their refuge will be the Fire, and wretched is the residence of the wrongdoers.

And Allah had certainly fulfilled His promise to you when you were killing the enemy by His permission until [the time] when you lost courage and fell to disputing about the order [given by the Prophet] and disobeyed after He had shown you that which you love. Among you are some who desire this world, and among you are some who desire the Hereafter. Then he turned you back from them [defeated] that He might test you. And He has already forgiven you, and Allah is the possessor of bounty for the believers.

[Remember] when you [fled and] climbed [the mountain] without looking aside at anyone while the Messenger was calling you from behind. So Allah repaid you with distress upon distress so you would not grieve for that which had escaped you [of victory and spoils of war] or [for] that which had befallen you [of injury and death]. And Allah is [fully] Acquainted with what you do.